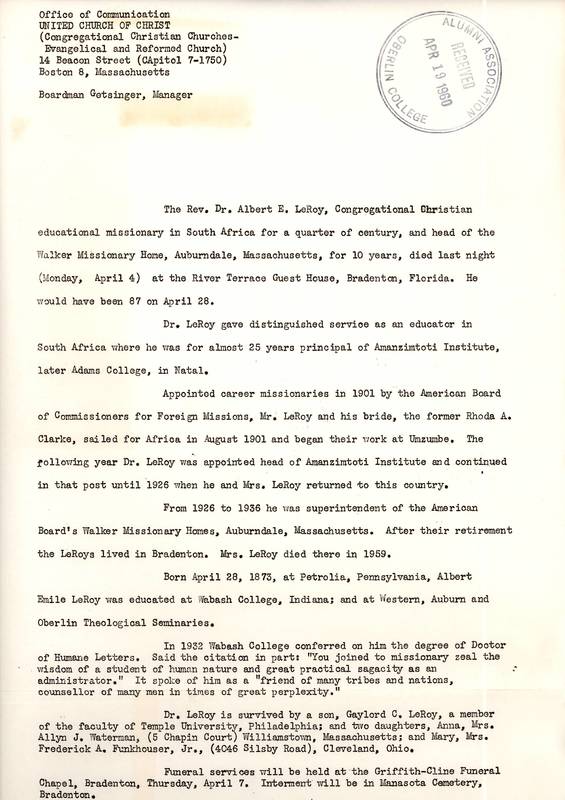 This is Reverend A.E. LeRoy's obituary from April 5, 1960, published by the Office of Communications at the United Church of Christ, 14 Beacon Street Boston, MA. It was written the day after he died and provides information about his time spent as the principal at Amanzimtoti Institute in Natal, South Africa. It goes on to discuss LeRoy's work upon returning to the United States and provides information about his surviving family members.


The Rev. Dr Albert E. LeRoy, Congregational Christian educational missionary in South Africa for a quarter of a century, and head of the Walker Missionary Home, Auburndale, Massachusetts, for 10 years, died last night (Monday, April 4) at the River Terrace Guest House, Bradenton, Florida. He would have been 87 on April 28.

Dr. LeRoy gave distinguished service as an educator in South Africa where he was for almost 25 years principal of Amanzimtoti Institute, later Adams College, in Natal.

Appointed career missionaries in 1901 by the American Board of Commissioners for Foreign Missions, Mr. LeRoy and his bride, the former Rhoda A. Clarke, sailed for Africa in August 1901 and began their work at Unzumbe. The following year Dr. LeRoy was appointed head of Amanzimtoti Institute and continued in that post until 1926 when he and Mrs. LeRoy returned to this country.

From 1926 to 1936 he was superintended of the American Board's Walker Missionary Homes, Auburndale, Massachusetts. After their retirement the LeRoys lived in Bradenton. Mrs. LeRoy died there in 1959.

In 1932 Wabash College conferred on him the degree of Doctor of HUmane Letters. Said the citation in part: "You joined to missionary zeal the wisdom of a student of human nature and great practical sagacity as an administrator." It spoke of him as a "friend of many tribes and nations, counsellor of many men in times of great perplexity."

Funeral services will be held at the Griffith-Cline Funeral Chapel, Bradenton, Thursday, April 7. Interment will be in Manasota Cemetry, Bradenton.