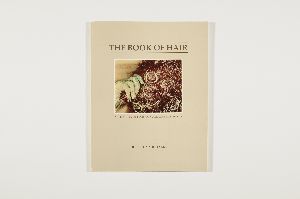 In The Book of Hair photographer and book artist Rebecca Michaels posits the discourse surrounding hair as a nexus of gender, racial, and cultural identity. She presents an exploration of the tools, processes and cultural practices related to hair by first displaying a satirical, pseudo-scientific study of what she calls ‘primitive’ customs. Like John Baldessari’s Brutus Killed Caesar (1976), also in Oberlin’s artists’ books collection, Michaels uses a repetitive format and images intended to communicate a particular subtext. She begins with a preface lauding the “beauty and propriety” of bodily adornment customs in “primitive” communities. Theorizing on the origins and necessity of such customs, she states: “No primitive activities, from religious ceremonies to food gathering, were ever carried on without that apparently necessary reification of the human ego which could only be provided by a change in physical appearance.” This preface seems unbefitting of a 1980s feminist artist in its anachronistic and imperialist tone, but the fact that the entire enterprise is satirical is not entirely revealed until the book’s final page.

Using a labor intensive, 19th century technique called offset printing Michaels furthers the connection to the pseudo-empirical catalogues displaying exotic species from the far reaches of Western empires. On the left page of each two-page spread are “tables” describing physical features and customs of certain peoples, providing neither historical nor geographical context for these ethnographies. The opposite pages show images of contemporary tools for shaving, plucking, and styling hair, numbered as “exhibits.” The left pages fold out, expanding to show newsprint cutouts juxtaposing Western and tribal body modification practices. The images in the middle of the tripartite system show leaves of notebook paper with typewritten descriptions of individuals with psychological conditions related to hair, such as trichotillomania. Michaels again references an empirical cataloging system in referring to these anecdotes as “cases.”  This theme is reinforced at the end of the book by the “index.” At the same time, however, the “index” does not provide any sort of clarity in terms of the book’s meaning, undermining the overtones that it at first appears to bolster. The index raises issues that echo throughout the book, providing more questions than answers. It is the index that makes the parodic nature of the project apparent, rendering the imperialist tone of the preface satirical and transforming the juxtapositions of Western and tribal images into suggestions of parity. The Book of Hair challenges Western conceptions of superiority regarding hair and body modification practices, relating these views to imperialist ideology.