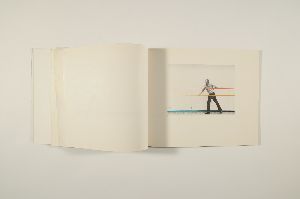 Throwing a Ball Once to Get Three Melodies and Fifteen Chords is illustrative of John Baldessari’s use of photography as a tool to demonstrate a conceptual process. The book consists of a series of photographs taken as Baldessari stands against a wall, winds up, and throws a ball. Three horizontal lines colored yellow, red, and blue bisect Baldessari’s right hand, the ball, and his left leg, respectively, so that the lines move relative to each other and the stable frame of the photograph as Baldessari completes the action throwing the ball. The photographs’ stark horizontal compositions are suggestive of musical staff paper; the changing positions of the lines correspond to the rendering of different pitches in traditional musical notation. Thus, Baldessari uses photography as a device to realize a hypothetical connection between his physical movements and musical tones. The book is also related to a series of works he completed in the early 1970s using photography and red balls to attempt to “capture” certain simple images (e.g., Throwing Four Balls in the Air To Get a Square (Best of 36 Tries), 1974).

Brutus Killed Caesar, produced in 1976 in the style of flip-books popularized in the late nineteenth century, posits that the images shown can be ‘read’ to create a sort of tautological narrative. In Brutus Killed Caesar, there is no action or overt narrative, only an implication of events gleaned through the book’s title and images of untouched weapons imbued with potential energy. The task of crafting a specific plotline is left to the viewer. Baldessari disregards a linear progression of time and traditional narration through repetition of images and a lack of text.