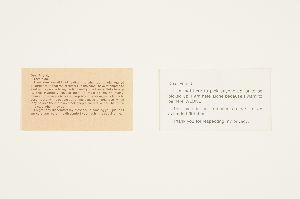 Angry Art
My Calling (Card) Number One and Number Two (1986)

Adrian Piper’s My Calling (Card) Number One: Reactive Guerrilla Performance for Dinners and Cocktail Parties and My Calling (Card) Number Two: Reactive Guerrilla Performance for Bars and Discos exist as archival objects of a series of spontaneous performances that Piper conducted from 1986 to 1990.  The work consists of two cards, each approximately the size and weight of a business card. On the cards Piper printed texts that address a recipient who has caused her discomfort. Typically the business card represents a public image, a distillation of personal identity into a glossy synopsis intended for distribution to relevant parties. As a pair, these cards address Piper’s identity as a black woman, yet the cards are not meant to be solely autobiographical. As opposed to reproducing unilateral definitions of identity and preexisting social constraints, these pseudo-business-cards are intended to challenge the racial and gender inequities often inherent in contemporary social interactions. These texts are produced out of the artist’s personal experience, but they speak more broadly by prompting the viewer to examine their own experience with race and gender in American society. 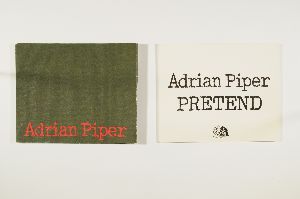 Adrian Piper’s Pretend (1990) is a hybrid artist’s book and exhibition catalogue documenting the artist’s solo exhibition of the same name at John Weber Gallery in New York. Pretend executes a scathing critique of the inequities inherent in American society.  Using photographs overlaid with text, Piper skewers the status quo by exposing the harrowing realities of the Black experience. The book begins with more innocuous imagery, with photographs of “Cosby Show”-like middle-class families overlaid with messages such as “We are all around you” and “You are safe.” The imagery becomes more challenging when, along with photos of Black waitresses and entertainers, Piper includes images of horrific violence, urging a Black audience to “pretend not to know what you know.”  The entirety of these images represent both the history of Blacks in America and the reality of the contemporary Black experience – in order to assimilate and assure people that their presence is “safe,” they must “pretend” to forget this legacy of oppression. Through her artist’s book and exhibition, Piper effectively confronts the complicity of her audience in perpetuating these social and economic inequities. 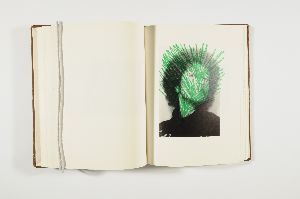 Piper’s Colored People (1991) turns the titular phrase of racial stigmatization on its head by depicting the concept literally. The artist divides her book into eight sections illustrating idioms relating color and emotion - “Tickled Pink,” “Scarlet with Embarrassment,” “Purple with Anger,” “Blue,” “Green with Envy,” “Jaundiced Yellow,” “White with Fear,” and “Black Depression.” As Piper outlines in her preface, each participant “was asked to take eight photos of themselves, each expressing facially the corresponding colloquial metaphor of color as mood.” In each section of the book Piper includes selected photos of the participants, which she has scribbled over with the color corresponding to the mood of the section. This project, while humorous and lighthearted in tone, is meant to highlight the arbitrary view of race as a sole determinate of identity. The colors drawn over the photographs emphasize the externally imposed nature of a stigma based on ‘color.’ Colored People aims to combat the essentializing tendencies of racial discrimination by bringing to the fore the human emotions shared by all people and redefining the language used to perpetuate such stigmatization.