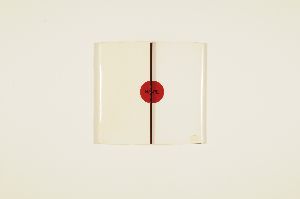 Suzanne Lacy is a feminist, activist, writer and artist who utilizes installation, video and large-scale performance to expose themes of discrimination and urban life. Rape Is, first published in 1972, is a parody of the sappy “Happiness Is” books, which aim to incite inspiration. Instead, Lacy’s book is an object of forceful awareness. The book’s combination of articulate text and bold design create a text-based exploration of the sexual abuse experienced by women, disregarded by much of the American public and media during the time the book was published. Rape Is is a sequence of diverse definitions and scenarios related to the mistreatment and objectification of the female body. Lacy highlights habits of exploitation that lead to and result from the literal act of abuse. An example from the book reads, “Rape Is… when a stranger in the street uses you for his fantasy and leaves you feeling naked.” The left page always stating in capitalized, thick, black letters, RAPE IS, and the right containing a single sentence spelling out an individual incidence of physical violence, shameful mistreatment or unremitting blame that sexual assault victims are forced to endure. By isolating both the phrase “RAPE IS” and each distinct description upon its own page, the artist communicates the gravity of these incidences in visual, compositional terms. The book’s format urges its viewer to read slowly. The expanse of white space surrounding each phrase distinguishes every act of mistreatment as one that is encompassing for its victim and fundamental for society to acknowledge and extinguish.

Lacy created this book at the beginning of her career as a feminist activist. A year after Rape Is was published, Lacy staged Three Weeks, a public performance which highlighted incidences of rape in Los Angeles County during a three week period. Lacy installed maps in public spaces and marked incidences of rape beside a complimentary map, which highlighted the locations of crisis centers and hotlines available. Throughout the 1970s onward, Lacy has continued collaborative, community work, combined with solo performances dealing with similar subject matters worldwide.