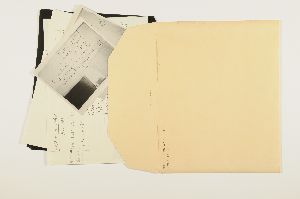 Joseph Kosuth’s artworks and writings have played an instrumental role in the development of conceptual art.  His 1970 artist’s book comes packaged in a manila-colored envelope labeled discretely in typewritten letters. The contents of the envelope include a series of single pages treated much like files in an itemized record, each depicting either text or imagery surrounding the idea of water, such as “ice,” “oxygen,” and “snow.” By formatting his book into a loose collection of pages--or files--Kosuth offers meandering guidance through a systematized report on the meaning of the familiar concept of water, thus calling attention to the ways in which the images presented interact with their linguistic/etymological counterparts.