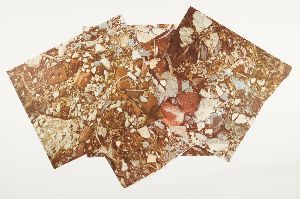 Torn Photograph from the Second Stop (Rubble): Second Mountain of Six Stops on a Section (1970)

Though he never considered himself a traditional photographer, Robert Smithson nonetheless extensively utilized photography to present his work.

Isolated, large-scale earthworks like Spiral Jetty (1970) necessitated photographic documentation, as did Smithson’s numerous projects investigating the physical terrain of various landscapes across the globe. Torn Photograph focuses on the agglomeration of rocks and objects on an unspecified mountain. That Smithson tore the print into four pieces is suggestive of a fracturing of the landscape, a theme the artist consistently explored in artworks and writings describing industrial wastelands and geologic transformations. Smithson created this edition for a 1970 collection of artists’ multiples titled Artists & Photographs.