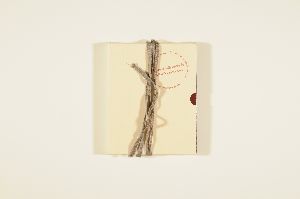 Rirkrit Tiravanija gained prominence in the early 1990s with a series of works consisting of meals cooked in galleries for the consumption of visitors and patrons. Much of Tiravanija’s subsequent work investigates the creation of other similarly open structures for social interaction.

Tiravanija created this 1998 artist’s book in reference to Jack Kerouac’s 1957 novel On the Road. Constructed like a set of three passports, the book documents a road trip Tiravanija led with five Thai art students across the United States. Maps, sketches of famed 20th century earthworks visited on the trip, quotes, and reproductions of photographs by Dorothea Lange and Robert Frank fill the pages of the passports and attempt to frame the young artists’ first-time experience with the American landscape.