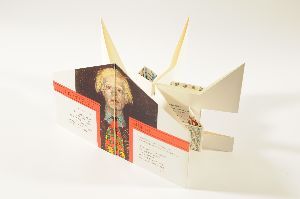 The Anti-Warhol Museum: proposals for the socially responsible disposal of Warholia (1993)

American artist Bonnie O’Connell has been an active participant in the book arts world since she began exploring the medium in 1971. Her 1993 work The Anti-Warhol Museum: proposals for the socially responsible disposal of Warholia displays an interest in testing the limits of the medium, using cuts and folds to create an effect similar to that of a paper snowflake. The five inch by six inch work unfolds accordion style into a four foot long indictment of Andy Warhol’s contributions to the “growth of Reagan-era ethics in art,” as the cover enumerates. O’Connell condemns Warhol’s complicity with the commodification of his art and proposes that instead of elevating works of art that elevate consumer goods, the cycle of consumption should be broken through addressing social issues.