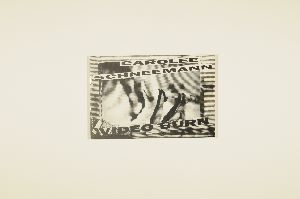 Working in a variety of media such as painting, drawing, performance and video, American artist Carolee Schneemann’s work engages with conceptions of gender, the body, and how (Stephanie left out a word here) interact within socially constructed schemas. Video Burn reflects Schneeman’s interest in exposing the interconnectedness of bodily oppression and media culture. Like Allan Kaprow’s Days Off, also featured in the AMAM’s Artist Books Collection, Video Burn is organized by a loosely calendar like structure with pages corresponding to days of the week. Opposite the title page is a sort of index with days of the week corresponding to the ribbons of text laced throughout the book. The connections between these fragments and the days of the week to which they correspond are not immediately apparent, but in highlighting the arbitrary nature of a governing system such as a calendar, Schnemann means to connect institutional strictures to those superimposed on the female body in everyday life. Her conflation of media in Video Burn serves to support this idea as well. The images in the book were generated from a series of drawings Schneemann worked on from 1987 to 1991, also titled Video Burn. She overlays the drawings with pixilated TV static and fragmented images of the female body, emphasizing the ways in which depictions of women and female bodies in the media frame notions of gender and power.