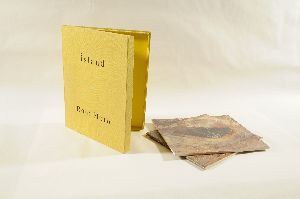 Contemporary American artist Roni Horn (b 1955) has developed an influential body of work in various media that examines the connections between humans and nature as well as manmade and natural forms. Through drawings, books and photographs she captures captivating portraits of people and landscapes that recall the aesthetics and ideologies of Minimalism.  She is well known for her photographic work as well as her sculpture, much of which consists of the pared down shapes and engaging textures of the Minimalist vernacular. Her books and photographic series blur the lines between Minimalism and Conceptualism, adhering to the formal logic of Minimalism while connecting to a broader ideological program.

Becoming a Landscape (2001) is the penultimate installment in Horn’s To Place book series (1990-2006). In this series she carries on the legacy of 1970s site-specific projects, particularly Robert Smithson’s documentation of the Great Salt Lake and photographic iterations his earthworks sculpture Spiral Jetty. Horn expands upon Smithson’s idea of site-specificity, calling her works site-dependent in reference to the work’s function as a representation of place. Becoming a Landscape includes photographs taken in Iceland from 1990 to 2002.  The photographs are presented in two identical volumes, each with forty-eight pages, showing images of hot springs interspersed with the image of a child’s face. The boy appears to be the same one depicted in Horn’s final installment of her To Place series, Doubt Box, published in 2006.

The two duplicate volumes denote the plurality of identity and the ways in which the human experience mirrors the cycles and patterns of nature. The hot springs Horn documents represent a shifting yet constant force within Iceland’s ancient landscape, and the boy’s presence within these images indicate the interconnectedness of Icelandic geological heritage and cultural identity. 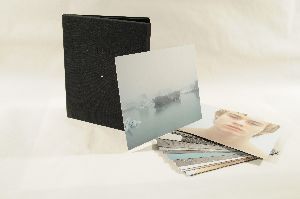 Doubt Box (2006) is the final installment in Horn’s To Place book series (1990-2006). The photographs are presented on twenty-eight two-sided cards, each with an image of the glacial river Skaftá on one side and alternating images of birds, icy landscapes and a boy’s face. The boy appears to be the same one depicted in Horn’s penultimate installment of her To Place series, Becoming a Landscape, published in 2001. The indication of change in the boy’s appearance highlights the parallel relationship between humans and nature; the human species experiences the same cycle of growth, death, and rebirth encoded in the geological history of a landscape.  The omnipresence of the river Skaftá represents a shifting yet constant force within Iceland’s ancient landscape, and the double-sided cards denote the crucial role this landscape plays in Icelandic cultural identity.