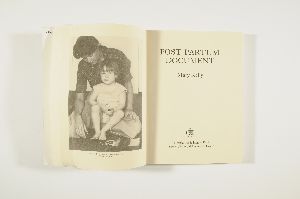 American artist Mary Kelly (b 1941) is a pioneer of feminist art and criticism.  Like other artists coming to prominence in the 1970s such as Carolee Schneemann, Martha Rosler, and Adrian Piper, Kelly’s work and writing mines the connections between gender, cultural politics and power. Her work Post-Partum Document (1973-79) had a profound influence on the development of Conceptual art.  The work in progress was first exhibited at London’s Institute of Contemporary Art in 1976 and has been exhibited at numerous museum and galleries in various iterations since.

In book form, Post-Partum Document registers Kelly’s ambitious and ideologically complex project to chronicle the growth of her son and the development of their relationship through objects, which she calls “documents”—ranging from scraps of fabric to stained diaper liners. Informed by both psychoanalytic and feminist theory, these objects come together to craft a narrative of the uncertainty, doubts, expectations, and struggles mothers often face, but seldom discuss openly for fear of appearing to be a ‘bad mother.’ Kelly examines the semiotics of motherhood through a similar means as Rebecca Michaels in The Book of Hair, in which Michaels looks at the cultural implications of hair using empirical tropes of classification and cataloging. Kelly sets an empirical tone in her table of contents, referring to each “document” as an “experiment” and using specialized psychoanalytic terminology. This theme continues in her preface by including a diagram of optical vision and explaining her methodology as would a psychologist in the forward to a published study. This empirical tone aims to render Kelly at once the subjective participant and the neutral observer of her study. This splitting of Kelly’s identity in the piece emphasizes the difficulties women face in fulfilling the roles of wife, mother, and singular woman.