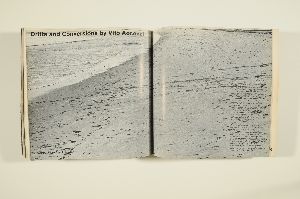 Vito Acconci’s (American, b 1940) Drifts and Conversions, published in Avalanche magazine’s 1971 Winter Issue, is a photographic record of two provocative, experimental performances that utilize the human body as a source of material manipulation.  In Drifts Acconci explores the inexactitude of performance as he utilizes his body to engage with the materials of sand, ocean and air.   Acconci disturbs a patch of wave-patterned sand by lying down, immersing his entire body in the material, and repeats this action on the shoreline. In Conversions Acconci explores the body as a gendered entity and the notion of gender as construct to be manipulated.  Acconci may merely place his penis between his legs (in Conversions) or apply red lipstick (in Kiss Off, a 1971 work in the AMAM’s collection) in order to ‘transform’ his gender. Acconci’s visceral, ephemeral processes opened up discussions about the body’s integral role in artistic practice and the viewers’ conception of art as an ongoing experiment versus a finite resolution.