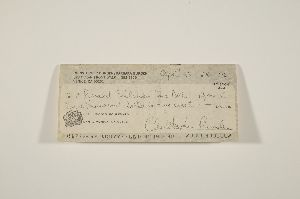 In September of 1977, Chris Burden held an exhibition in the Baum-Silverman Gallery in Los Angeles which featured collages of all the checks he had written in 1976, arranged by month. The artist’s book Full Financial Disclosure, roughly the size of a checkbook, replicates this presentation of the artist’s fiscal activities. The book lists by month all of the checks Burden had written in 1976, with annotations that explain the transaction that took place with each entry. Concurrently with the exhibition, Burden produced a television “commercial” where he again publicly disclosed his finances for 1976. Appearing in front of an American flag backdrop, Burden earnestly states that he “wish[es] to be the first artist to make a full public financial disclosure,” and then proceeds to present the audience with graphics detailing his gross income, expenses, and net profit for 1976 (which, if we are to trust his disclosure, amounted to $1,054).

Burden’s frank exposé of his financial situation and the business of art-making confronts our understanding of artists as society’s hallowed creators of priceless artifacts. In this manner, Full Financial Disclosure acts as an extension of Burden’s earlier performances, such as Shoot (1971) and Doomed (1975), which illuminated the ethical quandaries that could arise among audiences and institutions in the name of art. By further investigating the pragmatics upholding the cultural mythos surrounding art-making, Full Financial Disclosure is an early harbinger of later works that more explicitly address institutional arrangements for producing art, such as Napoleon d’Or (1981), Tower of Power (1985), Samson (1985), and Exposing the Foundation of the Museum (1986). The book also relates to the then-emerging medium of institutional critique, as practiced by artists such as Marcel Broodthaers, Andrea Fraser, Hans Haacke, and Martha Rosler.