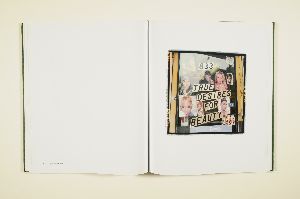 Zoe Leonard’s Analogue documents unraveling, ephemeral traces of worn storefronts, rubbish and commercial kitsch from mid-90’s to the early 2000’s on the Lower East Side. The series of images, each occupying its own individual page, has been taken with analogue photography to capture the transitive nature of the neighborhood during a period of multinational homogeneity. Decrepit mom-and-pop shops, abandoned graffiti-ridden gates, haphazardly arranged fabrics and cheap floral ironing boards wilt throughout the images of the overly lit storefronts and tired city sidewalks.

Just as small businesses were disappearing among corporate ascendency, the individualized and tactile process of photography was vanishing to digital development. Leonard’s images do not idealize the crumbling cityscape or the imperfect medium with which she documents. Rather, as art critic Helen Molesworth states Analogue [stages] the “tension between disappearance and tenacity…” alluding to that which is fading yet worthy of presence.