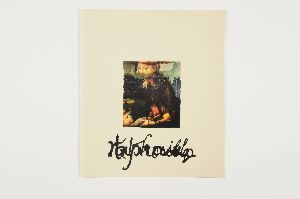 Andrea Fraser’s Woman 1/ Madonna and Child 1506-1967 (year) juxtaposes reproductions of Raphael’s sixteenth century depictions of the Madonna and Child and Willem de Kooning’s modernist paintings and sketches of women.  Fraser additionally integrates text from museum catalogues on both de Kooning and Raphael on pages opposite the images. The way in which Fraser has juxtaposed these images encourages a two-tiered interpretation of archetypal depictions of women, a sort of text and subtext. In an overt manner the contrast of the images presents a critique of the traditional modes of representing the female body in art – as idealized and rarefied in Raphael’s work and as a fragmented, mutilated form in de Kooning’s. The subtext of Fraser’s work is the underlying institutional critique present in her highlighting of these two oppositional modes of representation.  Fraser is making a clear statement of objection to the fact that in two of the most celebrated periods throughout art history the female body has been conversely objectified and defaced, all the while being subjected to the gaze of the viewer, the whim of male artists, and the narratives crafted by museums.